When I woke up at 6am on Sunday morning it was after just 2.5 hours sleep, but as someone who doesn’t drink tea or coffee I didn’t need to wait for a caffeine boost, so adrenaline kicked in and the second day of my Country 2 Country weekend commenced. You can read all about my pop up stage experiences here and review of day 1 on the main stage here. Now it’s time to get into the main stage acts that performed on Sunday, as the last few hours of Country 2 Country 2014 played out.

Taking the stage first was Chris Young in a set that seemed to last far fewer than the 45 minutes it was allocated. He was good though, very good, and I’d love to see him come back for a full tour. While he sung and played with passion and an almost ever present grin, the sound set up once again let us down as his vocals were drowned out by the guitars some of the time, something that I complained about during Martina McBride’s set the night before. 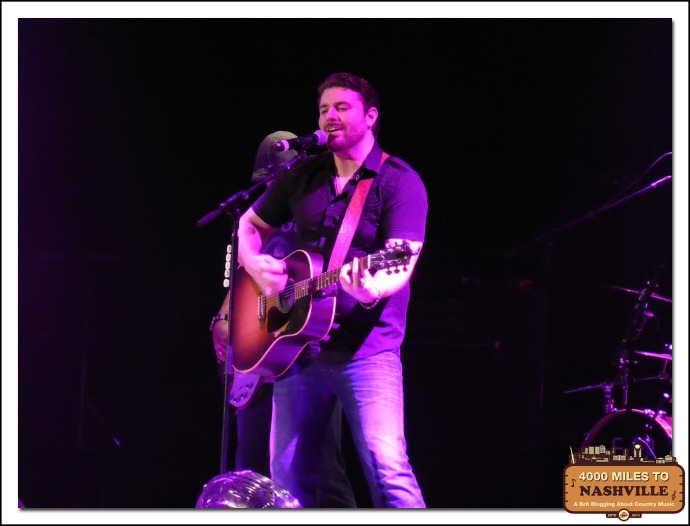 I am most familiar with his recent A.M. album so was pleased to hear Aw Naw, which is a great song to hear live, and sure to become his anthem. Who I Am With You saw him slow the tempo down and show us that he’s not all rock, though the high energy numbers did dominate. It was a very different way to start off the evening than the previous day, but a lot better as it got everyone pumping and wanting more.

Up next were The Band Perry, who along with the night’s headline act were one of the bands I first started listening to when I decided country music was where my heart lay. Their pop infused country tunes make them very accessible and they have had more success than many in transcending country music in the past few years. Kimberley is the consummate show woman and moves around the stage with confidence and poise. I didn’t have any problem hearing every single word of every song as she belted out hit after hit, with a voice that I’ve heard few get close to. While she is without doubt the leader of the group, her brothers Reid and Neil are given the spotlight too, whether that be to play their instruments, or in the case of Fat Bottomed Girls taking the lead vocals, but please don’t ask me to say which brother it was. 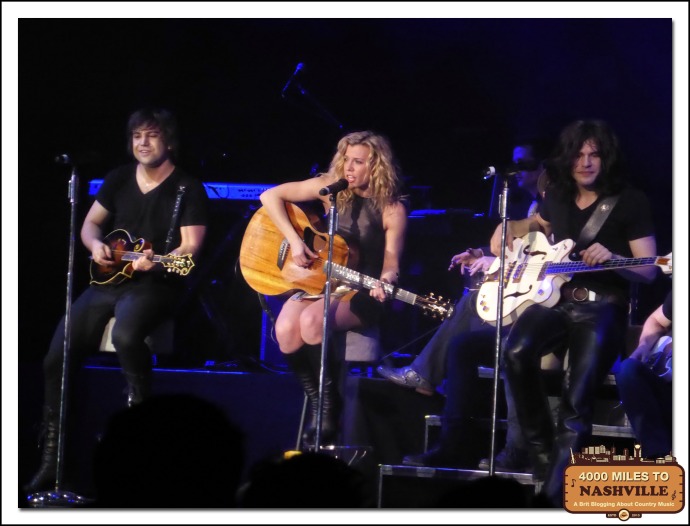 The Band Perry at Country 2 Country 2014

It wasn’t just music though, as we got more stories and chat than probably any other act of the weekend. As engaging as Kimberly is, it does come across as quite rehearsed, but we can forgive her that, with delivery as entertaining as she provides. I wanted to hear Pioneer, Done, Chainsaw and If I Die Young, and I got all of those, but would I get the song I liked the most? Absolutely, and not only that but Better Dig Two closed the set, in magnificent style. They used every inch of the stage and played to all sides of the arena. This was more of a show than any other act at Country 2 Country, but the music was of the highest quality too, and after Chris Young the energy and vibe just kept getting better.

What ever goes up has to come down, we all know that. It was the mood of the arena that seemed to plummet when Rascal Flatts played. Don’t get me wrong, there were plenty people signing along and obviously enjoying their music, but a noticeable percentage weren’t, myself included. I think the best way I can describe how I felt is that I just didn’t get it. I wasn’t keen on Gary LeVox’s voice, and his on stage antics often made me cringe and seemed below an act of their standing. My friend Mark, whose photos are used in this article, said they didn’t resonate, and he nailed it with that. They are a huge band, with massive record sales and a large following, but we can’t all like everything, and they just weren’t for me. Looking on the positive side, it gave me some much needed rest, as I stayed seated for the whole set until they finished with the song from the Cars film. 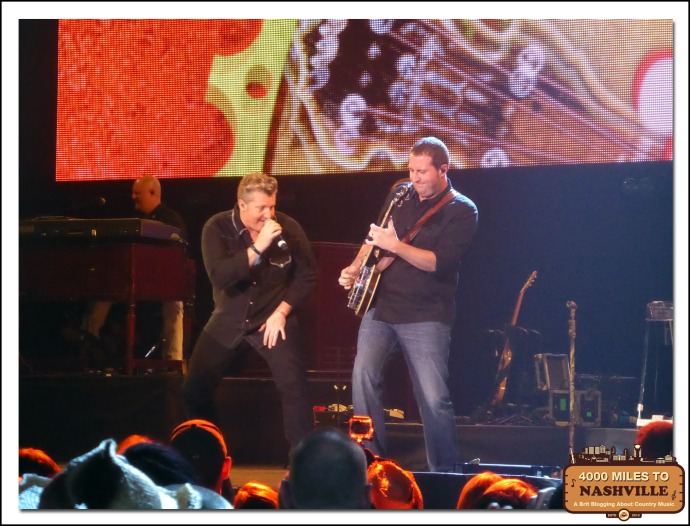 Let’s get things back on track and talk about Brad Paisley, the main event of the night and the act I was most looking forward to seeing all weekend. Well rested I jumped to my feet as soon as he came on stage and grinned from ear to ear like the Cheshire Cat as he started off with Southern Comfort Zone, one of my favourite tracks on his Wheelhouse album. Now I knew Brad was a great guitar player, but I wasn’t prepared for just how good he was and how much he featured guitar solos in his live shows. Blisteringly good may not cover it, as he played all over the stage and shredded the night away. As a massive guitar fan this made me very happy indeed, and seemed to have the same effect on the rest of the audience.

While I would have liked to hear more songs from Wheelhouse that would have requited a 3 hour set, and it’s understandable that he play a greatest hits style show for this crowd, and with a back catalogue of such high quality nobody can complain. Chris Young came out to sing Outstanding In Our Field with him, as presumably the original collaborator on the song Dierks Bentley had moved on from his Saturday night set in London. We also had Kimberley come out and sing Whiskey Lullaby in a beautiful rendition that gave us one of the more tender moments of the evening. Thankfully that was the end of the guests as I had feared after these two that Rascal Flatts may come out for a song – sorry Flatts fans, but that wouldn’t have been cool.

We had one purely instrumental number which was accompanied by some hilarious Star Wars / Star Trek animations on the big screen, and some world class guitar playing from Mr Paisley. At one point Brad disappeared, and appeared on the smaller stage that is located towards the back of the arena. There we got acoustic versions of Online and I’m Still A Guy, as a military operation unfolded in front of me. Security guards were placed a few feet away all along the alleyway towards the stage, the one that my seat and barrier in front faced. Were we about to get another hand slapping opportunity much like we did with Zac Brown the previous night? The answer was no, as though Brad did come past us, his minder’s blasting of my arm out of the way told us an unequivocal nobody touches Brad Paisley. That is understandable, given that he had his guitar still, round his neck. 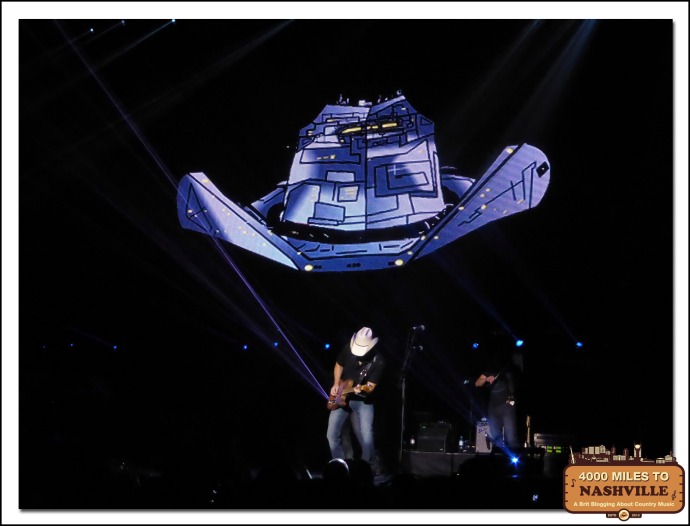 Mud On the Tyres, Ticks, Water – the hits just kept coming, and with interjections of that famous Brad Paisley humour which had the whole crowd in stitches. Though I didn’t get to hear my favourite Anything Like Me, Mona Lisa Smile went down like a 10 year old classic, and not a song that had only recently been played on radio here in the UK. In fact the woh woh woah woh part went on way after Brad left the stage and continued until he came back and joined in. The he gave us Alcohol as an encore, and what better way could there be to end a Brad Paisley concert? He even played is guitar using a beer bottle on the fret board, before throwing the bottle across the stage to one of his crew. In fact kudos to this guy as he had to catch a guitar at the start of the evening that Brad launched into the air from the centre of the stage to the side, and the guy caught it, thankfully! 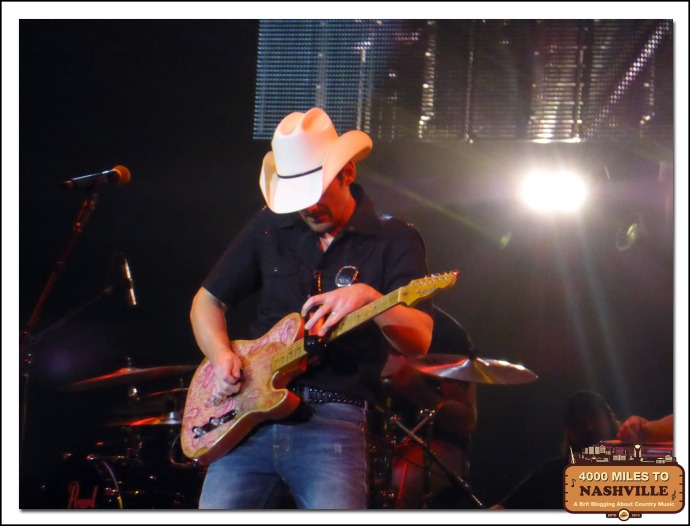 I was absolutely blown away by Brad Paisley. Sure he was the one I was looking forward to the most going in and had high expectations, but his blend of country rock and Jedi guitar playing had me in awe. Earlier Chris Young put himself on the map as someone who I wanted to see again, The Band Perry showed why they are such a hit around the world and Rascal Flatts played too. But the night belonged to Brad Paisley, as the aforementioned woh woh woah wohs continued into the toilets, the men’s anyway, and on the tube back into London. Then it was finished, and Country 2 Country was over for another year, but what a way to go out.